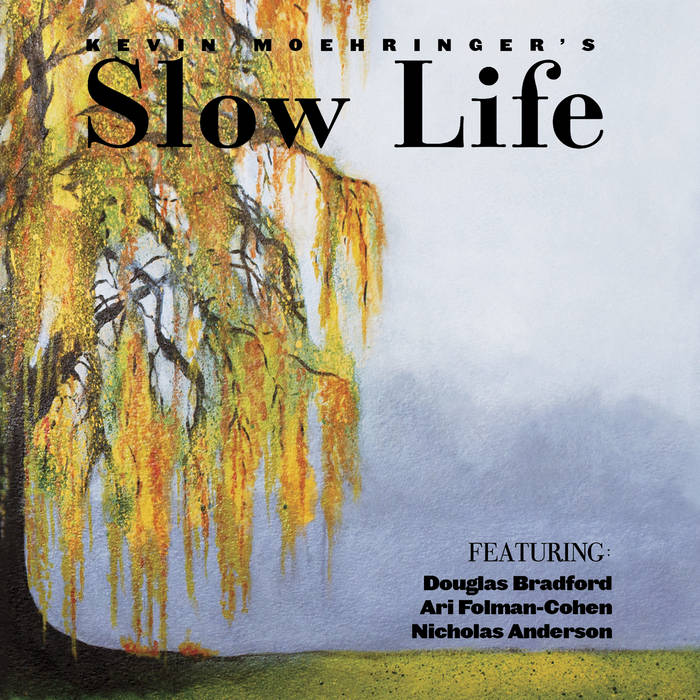 Kevin Moehringer's Slow Life formed in 2012, originally as KM Ballad Trio, featuring bassist Aidan Carroll and drummer Nick Anderson. The project later expanded to include Douglas Bradford's guitar and had an amicable personnel change on bass, replacing Aidan with long-time collaborator Ari Folman-Cohen. Nick, Ari, and Kevin performed as "KM Ballad Trio" for a while, and recorded as a trio in the early months of 2014, bringing on Kevin's long time friend, sax player Morgan Price to co-produce the album with him. Almost a year later, with a half-finished album in the works, Kevin was featured in the blog Humans Of New York, and the publics interest in his story inspired him to finish the album. He did a modest fundraising campaign to fund another recording session, mixing, mastering, and a run of vinyl records for the album's release. In the Spring of 2015, Kevin added guitarist Douglas Bradford to the band and changed the name to "Kevin Moehringer's Slow Life." The personnel change happened very naturally, as Douglas had been a classmate of Nick's at NYU, and a long-time supporter and fan of the band. After collaborating on a couple of live gigs, Kevin invited him to join the band. The quartet recorded several additional songs that make up the core of this album. They recorded with Jim Bertini at Galaxy Smith Studios in Brooklyn. Jim also mixed the album later that year.

The album has some covers on it, most notably the song "Cat Rider" originally by the band Little Dragon. There is also an original song by Douglas Bradford "Wish In A Well." The other covers are "Quo" by Kevin's long-time friend, woodwind player and and musical collaborator Robby Marshall, and the song "Nicsee" by an obscure nordic band The Einmarsch from their album "Howls." The song "Going Home" is a traditional song from the American songbook, and was also arranged famously by Antonin Dvorak in his "New World Symphony." Band member biographies below:

Kevin Moehringer is a Brooklyn-based freelance trombonist, sousaphonist, composer, bandleader, and educator. He has performed or recorded with such notable and diverse artists as The Walkmen, Skrillex, TV On The Radio, Easy Star All-Stars, Galactic, Janelle Monae, Talib Kweli, Ms. Mr., Matisyahu, Sinkane, Marco Benevento, Darcy James Argue’s Secret Society, Landlady, Slavic Soul Party, and Gregorio Uribe Big Band. He is a regular member of Brooklyn-based bands Zongo Junction, High And Mighty Brass Band, and Breakdown Brass. He studied music at University of Buffalo under the guidance of professors Jon Nelson and Stefan Sanders, and he received his Master’s Degree from Mannes College: The New School For Music, where studied with bass trombone legend David Taylor. He has performed for audiences in France, Germany, Turkey, Egypt, Australia, Colombia and all over North America. His own band “Kevin Moehringer’s Slow Life” made its debut in 2011, and will release its debut album in the Spring of 2016. Kevin’s wide range of musical influences have made him a staple of the NYC music scene and a first-call trombonist for music in all genres.

Brooklyn based guitarist and composer Douglas Bradford was born in New Orleans. He received his education from the New Orleans Center for the Creative Arts, the University of New Orleans, and performing on the bandstands of music venues in the “Big Easy.” Since relocating to New York in 2006, he has collaborated with many artists, endeavoring to create pan-idiomatic music unbound by the limitations of genre. His debut CD as a leader, ‘:atlas obscura’ described as a "refreshing debut" (NYC Jazz Record) and "quite a tight and powerful quartet," (Downtown Music Gallery) was released on Fresh Sound New Talent Records. His most recent project is ‘the Longest Day of the Year,’ a five movement laconic instrumental narrative, blending free improvisation and through-composition, inspired by the phases of winter, for clarinet, cello, baritone guitar, and drums. Noted for having "a beautiful touch, a unique harmonic sensibility and a musical maturity beyond his years," (Peter Bernstein) Douglas has contributed to several recordings as a sideman and has performed at international festivals and venues in Europe, USA, and Central America.

Ari Folman-Cohen began his musical career in New York City in 2006, and has since established himself as a go-to bass player for a wide array of music, both on upright and electric bass. Ari is a founding member of Aabaraki - an acclaimed indie-soul group affiliated with Rockwood Music Hall Records. He juggles a busy schedule supporting many singer/songwriters, jazz, experimental and world musicians in the New York area and beyond. Included in this list are Avante-Latin group Gato Loco, which records for the German jazz label Winter and Winter, and singer/songwriter Lynette Williams. Past stints include touring with renowned trumpeter/vocalist Jennifer Hartswick, recording and performing with pianist Sam Barsh, studio recordings for rapper Angel Haze, collaboration with experimental guitarist Mike Gamble and drummer Bobby Previte as well as performance art pieces centered around experimentation with solo bass and effects.

Nick Anderson is a New York based drummer who has toured extensively throughout the United States, Europe, Asia, Central America, and Africa. Born and raised in San Diego, California, he began his music career at age 12, performing in the local punk rock and ska scenes until he was 19. At age 20 Nick began his formal music education, enrolling at Berklee College of Music in Boston, MA, where he studied with John Ramsay and Kenwood Dennard. In 2006 he moved from Boston to New York to further his education at NYU, becoming active in the improv scene and studying with Joe Lovano, George Garzone, Kenny Warner, Wayne Krantz, John Scofield and Jean-Michel Pilc. Currently Nick is performing in various projects ranging from free improv, country and ska to western swing and pan-idiomatic styles, with bands such as Stephane Wrembel, Zephania and the 18 Wheelers, Pangari & the Socialites, Whirligig, Vaalbara, Douglas Bradford's Longest Day of the Year, Brittany Anjou Trio, William Tatge Trio, and many more. Reviewers have described Nick's playing as "downright lyrical, transcending the seeming constraints of the non-pitched drumset," (Rochester City Newspaper), and he's been referred to as "an ideal timekeeper with his light, sophisticated playing making the music dance," (All About Jazz).

Bandcamp Daily  your guide to the world of Bandcamp

Guest hosted by Tamar Osbourn aka Collocutor and Toshio Matsuura.